A Simple Introduction to Elliott Wave

Elliott Wave Theory is the method for explaining the movement of financial markets including stocks, futures, foreign exchange and cryptocurrencies.

In really simplistic terms, Elliott Wave Theory explains why markets do not simply go up or down in a straight line. It suggests that during any significant movement in the market, regardless of whether it’s up or down, there is a series of phases that occur. These phases take the form of a series of smaller up and down movements that for a patterns that looks like waves.

Furthermore Elliott Wave Theory also says that these patterns repeat. In other words there is a basic cycle of movement that we can observe in market prices. In general you can expect that once these identifiable phases or “wave” movements are complete, then the trend may be over and the market is ready to change direction.

This is where Elliott Wave Theory becomes very useful because if we can learn to identify these waves then we can start to project in advance where and when the market might next be ready to change trend. This is the basis of what analysts and traders who use Elliott Wave are trying to do!

Elliott Wave Theory can be made very complicated if you don’t keep sight of this simple objective… so in this primer, let’s make a commitment to keep it as simple as possible. At Elliott Wave Options we refer to this as a “Traders Approach”, meaning we are focusing on the components of Elliott Wave Theory that will allow us to make money rather than attempting to know everything about Elliott Wave.

Elliott Wave Theory is a style of “technical analysis”. For those that need a refresher, technical analysis is the study of past volume and price movements in order to predict future ones. The crux of this style of analysis is to look for patterns in past prices … such as trends, support & resistance and other chart patterns, in order to identify what is a next likely market moved based upon what has happened previously when those patterns have appeared.

People who use technical analysis are typically more traders than investors in that they have a shorter time frame for their investments such as days or weeks. When you are buying and selling over a short period you can’t rely on the fundamentals of a company because reports about the company’s financial reports do not come out that regularly. Therefore you are more likely to rely on news and rumours about that company.

Technical analysis is a method for analysing those news and rumours because it is generally believed that if someone has good information about a particular company’s future performance, then they are likely to either buy or sell that stock. That buying or selling activity will create “patterns” that we can see in our charts. Even if we don’t know the exact reason, we can spot the patterns that mean a number of people are starting to buy a stock or starting to sell a stock.

We can see these patterns in not only the stocks price, but also in the volume and even the movements in its options. Because both price and volume are quantitative figures, it is easy to compare historical figures to the present. This has allowed technical analysts to build a wide array of techniques and statistical models (called indicators) designed to understand current market conditions and help predict future ones. These indicators range from the simple, such as a moving average, to the more complicated, such as a MACD.  As you’ll discover in any technical analysis text, there are hundreds of technical analysis indicators to choose from. Our focus is Elliott Wave and a small number of indicators that compliment Elliott Wave and can act as a filter to help picking the right trades.

Ralph Nelson Elliott was born in 1871 in Marysville, Kansas. As a professional he moved into the field of accounting and was primarily employed in executive positions amongst the top railroad companies of the time. In 1920, Elliott’s life changes when he was hired by the US Department of State to assist in the financial reorganisation of Nicaragua. It was during this assignment that he contracted an illness that forced him into early retirement and concentrated his keen analytical mind to the study of the stock markets.

After studying 75 years worth of data of stock market indices (including yearly, monthly, weekly, daily, hourly, and even half-hourly charts), Elliot published his third book (in collaboration with Charles J. Collins) called The Wave Principle (in August 1938). In it, Elliott advocated that, although stock market trends may appear random and unpredictable, they actually follow predictable natural laws. With knowledge of these laws price action and reaction can be measured and forecasts created. Following the publication of The Wave Principle, Elliot was asked to write 12 articles for Financial World magazine in which he would describe his new system for analysing market trends and come to increasing fame amongst certain stock brokers and their client bases.

In his book and articles, Elliott observed that stock markets move in a series of rhythmic patterns which are associated to a natural progression of shifts based on mass investor psychology. As market participants vacillate between greed and fear, price patterns develop. He called these price patterns “waves”. 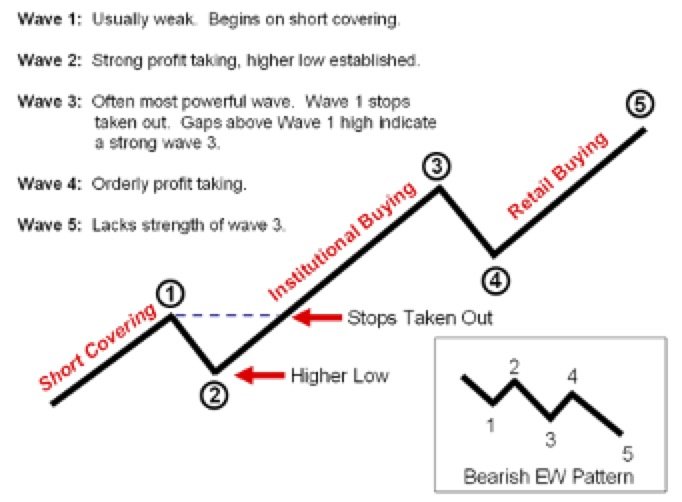 Once the buying subsides, Wave 2 begins with a very strong round of selling (or buying for bearish pattern), however the selling is not enough to bring the stock to the beginning of Wave 1, forming a higher low.

Wave 3 begins with another round of buying.  Wave 3 will often find resistance at the high of Wave 1, where stops will tend to accumulate.  Gaps above Wave 3 are an indication that a large number of stops have been taken out and signal that a strong Wave 3 is underway.  Wave 3 is often called the “Institutional Wave” and is driven by large investors.  It is most often the longest and strongest wave in terms of price movement and time.

Wave 5 begins when new highs are set, but on less momentum (pressure).  The end of the trend is near.

Elliott further discovered that each wave, whether impulsive or corrective, subdivides into smaller waves and/or comprises a part of a larger wave.

This allows waves to be analysed in time periods ranging from a matter of minutes to many centuries. 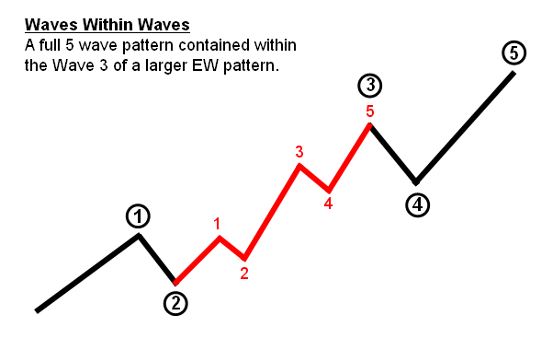 These ‘waves within waves’ are an important consideration for the Elliott trader and are often termed, “fractals”. Fractals occur regularly in nature and are most commonly observed in those things that grow or develop, from plants and leaves through the crystallisation of minerals all the way to blood veins and river basin systems. In a similar fashion the fractal growth of the market allows an Elliott Wave trader to observe the short term market action in relation to the longer term market action, knowing that an existing pattern is part of a bigger overall pattern. 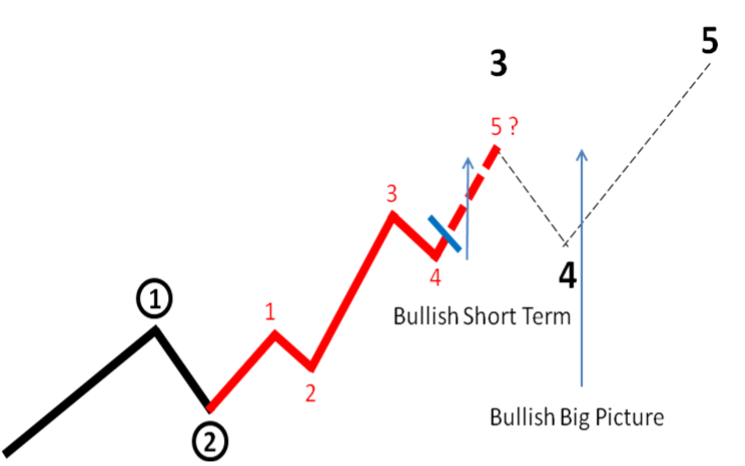 This can be a very important filter. By ensuring that the shorter term daily Elliott count is in sympathy with the longer range Elliott count, there is tremendous opportunity to be in a position that is aligned with the primary and secondary trend.